loading
« Back to Map of all ESO Skyshards in Tamriel
« Click here to see all Skyshard guides for Elsweyr
Guide:
The “ignoble abode” part refers to a dungeon found in the northern part of Elsweyr. It is located west from Riverhold, the northernmost settlement. It is north from the Star Haven Wayshrine, Prowl group boss and Starlight Adeptorium camp.

Just like the other delves, the entrance to the Abode of Ignominy is not exactly next to a road, but a bit further from it, toward the mountains. If you zoom in on the map of this area, you’ll spot a small lake. Head west from it, and you’ll get a notification about the delve’s presence. There is a small camp in front, with an NPC called Narama-ko next to it. She gives the delve-specific quest, while trying to dry off the wet clothes close to the fire pit.

“For the Khajiit, Mafal is the Clan Mother of the Dark Secrets, the recorder of hidden guild and eternal shame. This fallen temple was once the center of her worship, before the Sinner Suicided brought her cult into disfavor. Now it hosts… others.”

The mouth of the cave, where our final goal lies, is located in the delve’s largest room. To get there, head south from the entrance. After a long hallway, you’ll spot the skyshard on the other side, at the entrance to the cave. It is among the ruins, next to some blue foliage, a small tree, surrounded by enemies. They will be consistent in stopping you when trying to use the shard, so you’ll have to defeat them beforehand. 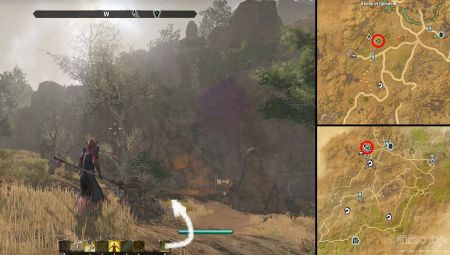 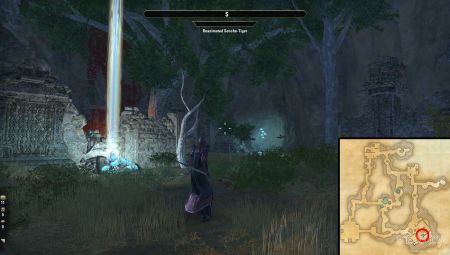 At the mouth of a cave – Map Location