loading
« Back to Map of all ESO Skyshards in Tamriel
« Click here to see all Skyshard guides for Vvardenfell
Guide:
The Dwarven bridge we are out for is located in the northwestern corner of Vvardenfell. It’s in the zone marked as Yasammadin area of interest, north from Gnisis and its wayshrine.

This zone is probably the most densely-filled with roads. If you open up the map, look for a structure marking just east from the “eye” icon. This structure is a tall building, that is only reachable by a long bridge from the eastern side. The final outdoor skyshard is on its southern side, next to some metal pipe, close to one of the bridge pillars.

You’ll find the rest of the skyshards (numbers 11 through 18) indoors, in public and solo dungeons. The first ten were easy in terms of not fighting anyone to grab them, while the last eight are easy in terms of their locations being marked on the map as dungeons. 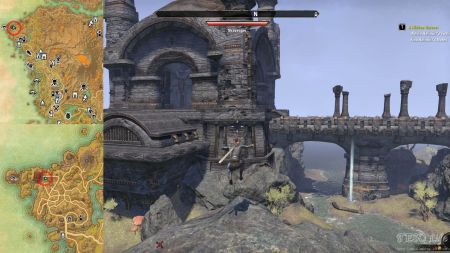 « Click here to see all Skyshard guides for Vvardenfell