loading
« Back to Map of all ESO Skyshards in Tamriel
« Click here to see all Skyshard guides for Imperial City
Guide:
The cheap seats we are after are inside the Arena District of the Imperial City. This district is found in the northeastern part of town.

This one is found in the open, and there is no need to enter the sewers. To find it, you’ll need to head to the eastern part of the Arena District, just a bit south from the Ethereal Trophy Vault entrance, the one where the Ebonheart Pact base is located.

You’ll spot a large blue-ish spiky rock in this area. There are small stairs that lead downhill, with a couple of enemies nearby, and a short stone pillar with a lamppost. The districts are not large areas, and it is generally easy to find all the outside skyshards.

The shard is on a small platform, just next to the stairs. The nearby enemies will stop you from collecting it. Watch out for the patrolling one, as he is a bit tougher than the rest of them. You’ll understand the name “Cheap seats at a pit fight” as you look down the stairs. There are two friendly NPCs fighting each other there. They don’t seem to be enjoying it, so you can set them free. 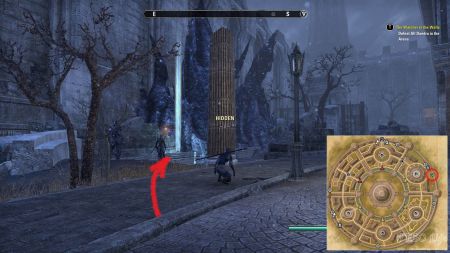