loading
« Back to Map of all ESO Skyshards in Tamriel
« Click here to see all Skyshard guides for Imperial City
Guide:
The exact location of this skyshard is contained in its name. To find it, go to the Elven Gardens District, in the northwestern part of Imperial City.

The darkest corner mentioned in the name is found in the northeastern corner of the district. While on the eastern side, follow the water and go north. At one point, you’ll need to leave the water. The corner you are after is on the level lower than the nearby main district platform. If you spot the lamppost, look down from it. You should be able to find it in the pile of rubbish. There are some enemies on the way there, but nothing you can’t avoid.

If you fight for the Aldmeri Dominion and die in this district, you’ll be resurrected at its Rally Point, just a couple of steps west from the shard. This is also the richest area in terms of shards. There is one more nearby, in the other district. 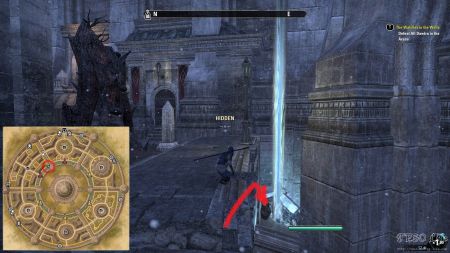