loading
« Back to Map of all ESO Skyshards in Tamriel
« Click here to see all Skyshard guides for Elsweyr
Guide:
The Prowl that this skyshard hint mentions is a striking locale in western Elsweyr. You’ll find it south from the Star Haven Wayshrine and the Starlight Adeptorium crafting site, west from the Ashen Scar graveyard, north from the Desert Wind Caverns delve. If you find yourself on the westernmost road, you’ll quickly get the map notification for this place.

The ruins are on the other side of the main road, opposite the Prowl map icon. Coming from the north, following the mountain range, this is where you’ll first spot the ruins. On this side of the road there are also two small ponds. You’ll find a couple of perpendicular stone walls north from the larger one, the one with the ruins at its center. There is a tall tree close to them, as an additional landscape marker that makes finding it easier. The skyshard is tucked away in the corner formed by the two ruined walls. 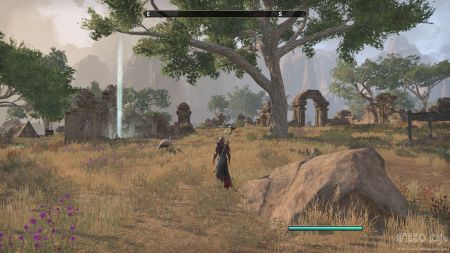 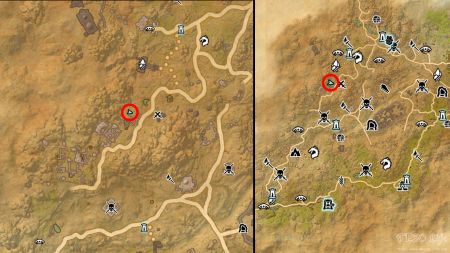