loading
« Back to Map of all ESO Skyshards in Tamriel
« Click here to see all Skyshard guides for Elsweyr
Guide:
This hint is almost entirely unhelpful, as there are far too many dragons on the map, and they’re all called Dragon. You’ll find this particular dragon in the southwest of Elsweyr, southwest of the Stitches, southeast of Cicatrice, northwest of Merryvale Farms.

The best way to reach it would be to spawn at the Stitches wayshrine, then follow the road southwest until you reach Cicatrice. Once you get there, turn east and head into the hills. The shard is near the top of the hill, next to a couple of stone pillars. You might also spot a couple of Khajiit facing the skyshard, with their weapons raised like offerings.

Their names are Saziza and Tashdu. We didn’t get the chance to talk to them since we were in a hurry, but it looks like there’s a story there. Maybe some weird desert cult? Or a couple of brave warriors preparing to take on the nearby dragon? 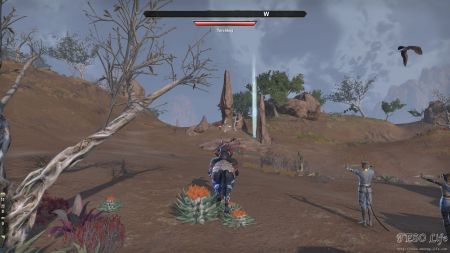 In the shadow of a Dragon’s wings 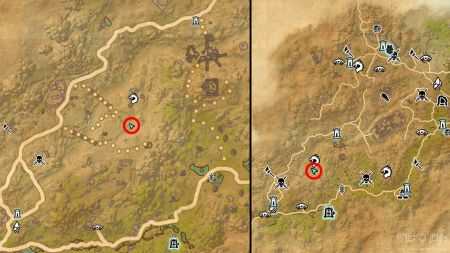