loading
« Back to Map of all ESO Skyshards in Tamriel
« Click here to see all Skyshard guides for Wrothgar
Guide:
Found in the northwestern part of Wrothgar, northwest from Icy Shore Wayshrine, in the area marked as Frozen Fleet.

This is probably my favorite place in Wrothgar. As you come close to it, you’ll spot many sunken ships that are frozen in the ice. Unlike other areas in this map, it seems like this one has a smaller amount of hills. It is like a cold, winter desert.

Our 1/3 of a skill point is located at the western part of Frozen Fleet. Look for a sunken ship that is broken in half. There should be a larger ice pillar rising from its middle. The shard is on the ground, almost tucked in. Since you’ll be probably coming from east, it can be seen from far away. Not even the fog in the area can cover it that well. 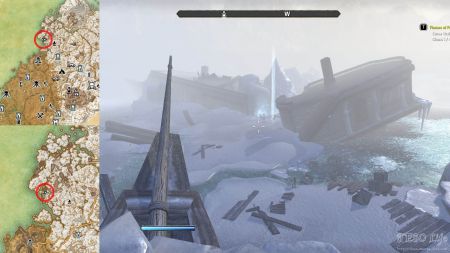 Click on the thumbnail to see the original image.
« Click here to see all Skyshard guides for Wrothgar