loading
« Back to Map of all ESO Skyshards in Tamriel
« Click here to see all Skyshard guides for Hew’s Bane
Guide:
On the ground, between Abah’s Landing to the west, and Thrall Cove group boss to the east.

If you follow the road northwest from the Abah’s Landing wayshrine, you’ll spot the Lost Pavilion unique crafting station. Leave the main road, and go south from the Lost Pavilion. There is a small gap between two large boulders. Head toward it. The “Near what is now Lost” skyshard should be in that gap, on the ground, close to one of the boulders. From here, you can continue west toward the Thrall Cove group boss, or head north toward the solo dungeon and another shard. 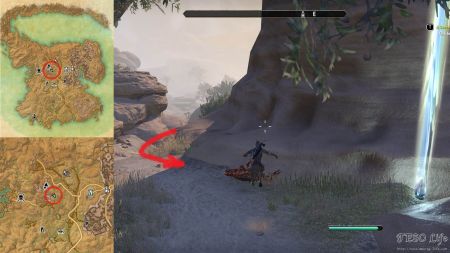 Click on the thumbnail to see the original image.
« Click here to see all Skyshard guides for Hew’s Bane