loading
« Back to Map of all ESO Skyshards in Tamriel
« Click here to see all Skyshard guides for Elsweyr
Guide:
Rimmen Necropolis is a public dungeon found just southwest from the town of Rimmen. It is surrounded by the Rimmen Masterworks crafting site to the north, the Scar’s Edge group boss to the west, the Anequina Aqueduct fort to the east, and the Hakoshae settlement and its Wayshrine to the south. Follow the road south from Rimmen and get to the main road, then go toward the path that is not connected to the main road. This side path leads to the public dungeon.

“The Rimmen Necropolis, a sprawling subterranean burial site so old and extensive that no living Khajit has ever explored its full expanse. It dates back to at least the time of the Merrunz-worshiping Darloc Brae, and many of his soldiers were buried there.”

The altar we are headed toward is located in the northeastern part of the delve. There are two paths leading up to it, and both are filled with enemies, which is not weird as this is a public dungeon after all. No matter which path you take, you’ll end up in a room full of enemies. This altar room has a stone pillar at its center, with two animal statues next to it. The skyshard is in the northeastern part of this room, on what looks like a stone grave. Although this is a small room, the specific place is well hidden, and you might not spot it at first. 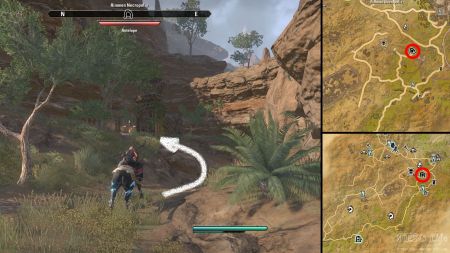 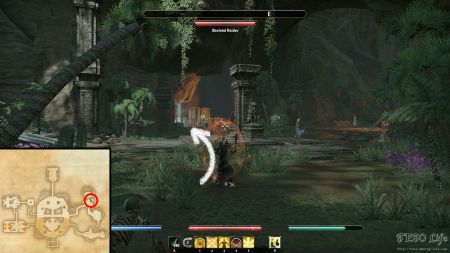 On an altar – with the map location