loading
« Back to Map of all ESO Skyshards in Tamriel
« Click here to see all Skyshard guides for Elsweyr
Guide:
Darkpool Mine is a delve in the southwestern part of Elsweyr. You’ll find it north of the Scar’s End wayshrine, west of Talon Gulch. The best way to get there would be to simply follow the road north from the aforementioned wayshrine.

“These pits were originally carved out as salt and sulfur mines back in the days of the terrible Darloc Brae, who dedicated the digs to his Daedric patron, Merrunz. Abandoned for generations, the mines were recently reopened.”

After you pass the crossroads, head left towards the foot of the mountain. The mine’s entrance is relatively hidden – there are some trees blocking the view, and the lower elevation doesn’t help either. Once you’re in, head to the chamber in the middle of the cave. When you enter it, you’ll notice a pond and a big statue of a kneeling Khajiit. The skyshard will be on an island in the pond – the glow makes it hard to miss.

The mines have been used to gather salt and sulfur, which sounds pretty hellish if you ask me. They were dug out during the reign of Darloc Brae, and were dedicated to one of the Daedra, which makes the whole thing even more hellish. Abandoned at some point in the province’s history, they were recently reopened. Scary place, but the skyshard is incentive enough to visit it. 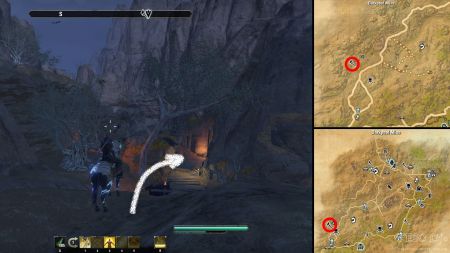 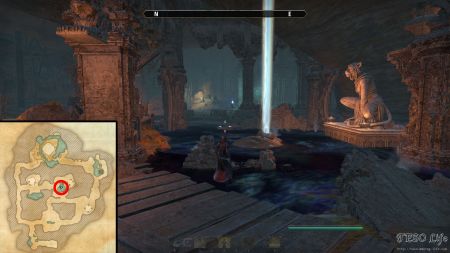 On an oil-slick island – Map Location