loading
« Back to Map of all ESO Skyshards in Tamriel
« Click here to see all Skyshard guides for Western Skyrim
Guide:
The Shadowgreen delve is not inside the Blackreach map, but rather positioned at the northern part of Western Skyrim, deep inside Mount Kilkreath. It is easy to spot its whereabouts, as it’s found just southeast from Kyne’s Aegis Trial, a place of interest that is probably marked on the map from the start. The closest wayshrine is the one in the southwest called Kilkreath Temple, but if you don’t have it, you can use the one in Solitude. There is also the Highland giant camp northeast from the delve, and the Northern Watch ritual site in the same direction.

This part of the map is surrounded with tall mountain edges, so you best make it here from the northern road. There is an unmarked pathway going toward the delve, which also has stone posts that probably serve as guidance when there is a lot of snow. Follow the path, and you’ll reach the entrance and a wounded High elf named Rafilerrion, who gives you a quest called “The Mountain Bellows”. There is a small cave entrance with some vines on it close to him.

The highest precipice in the cave, the one we are interested in, is visible just above and near the entrance. If you look closely at the northern part of the first room, just above the water, on the top of the hill, close to a bridge, you can spot the skyshard’s light. To reach it, continue north into the next room, and up the hill. Once on top of the hill, inside a small cave, you’ll see two new pathways. One is leading to the eastern part of the cave, and the other one toward the south. Go through the one leading to the south – the one on your right.

At the end of the cave pathway, you’ll reach a bridge. Don’t go over it just yet, but rather pan your view to the right. There is a small, almost imperceptible road. Use it to reach the Skyshard and a new piece of a skill point. Watch out for a black bear that is guarding the bridge, as it will follow you if you get spotted. 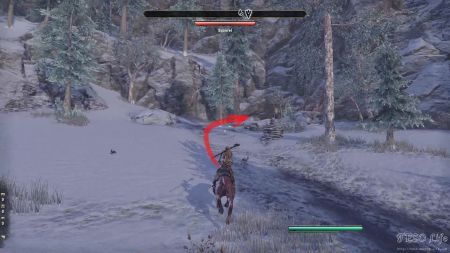 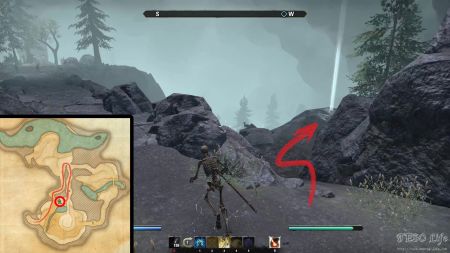 On one of the highest precipices in Shadowgreen.