loading
« Back to Map of all ESO Skyshards in Tamriel
« Click here to see all Skyshard guides for Wrothgar
Guide:
Located inside a dungeon called Thukhozod’s Sanctum, found in southwestern Wrothgar, just southwest from Great Bay Wayshrine.

Head toward the wayshrine, if you don’t have it already. You’ll need to approach the Sanctum from the north. If you zoom in the map, you’ll spot this place on the map by its beige color.

The longest dungeon tunnel hides
in its western part our skill point upgrade. It will be in the higher tunnel area, close to some metal bars, across from a bookshelf. There is not much of a resistance inside, which is understandable considering this is a solo dungeon. If you want to kill the Sanctum’s boss as well, head to the delve’s southeastern room. 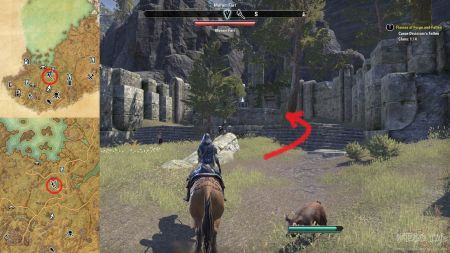