loading
« Back to Map of all ESO Skyshards in Tamriel
« Click here to see all Skyshard guides for Elsweyr
Guide:
The Serpent’s Tomb is a delve located in northern Elsweyr, between the Riverhold settlement to the west and Rimmen to the east. There is also the Sandswirl Manor locale to the east, and Hill of Shattered Swords to the west, with the closest wayshrine being in Riverhold.

In this part of the map, you’ll notice there are side paths that form away from the main road, each leading to one place of interest. One of them leads toward the Tomb of the Serpents, your current goal. The delve is inside the hole at the end of the path. The quest giver is in front of the entrance. Kiseravi is scavenging some crates, but will give you a new task if you are willing to help out.

“When the Second Empire fell, many Akaviri-descended Imperials fell with it. As scapegoats for the excesses of the Potentates, they were denied burial lin Cyrodiil, but were granted this tomb in Elsweyr to inter their honored dead”.

The armored guardians that protect the shard are in the westernmost part of the delve. Like in most of these cases, you’ll have to follow the path to the left once you get inside. As you enter the fourth room, you’ll spot four pillars that hold the ceiling. There is a minotaur at the center of the room, but you can avoid it entirely if you wish. The Awakened Sharpshooters near the walls will not be that easy on you, and you’ll need to deal with them in order to use the skyshard.

This place is also part of the Mural Mender achievement journey – it’s where you’ll pick up your first fragment. The four guardians near the library will not attack. They will protect the fragment you can only see when you have the related quest, but that is another story… 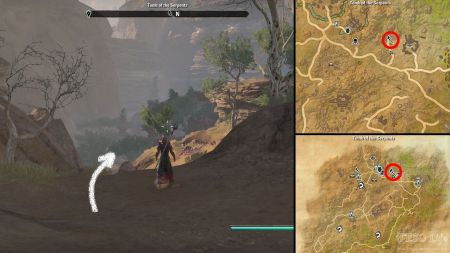 Tomb of the Serpents delve entrance. 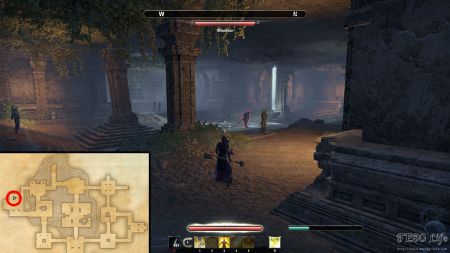