An Instrumental Triumph is a new achievement in Elder Scrolls Online. It was added in the Greymoor DLC, and you can start it by talking to a particular NPC in the city of Solitude. He’ll inform you about the missing items, and task you with finding all 19 music instruments. The only thing you’ll get by way of directions is a poem that contains hints to the instruments’ hiding places. Once you’ve found them all, you’ll unlock the achievement and get some nice furniture and the warm fuzzy feeling of having restored the Bard’s College to its former glory. If you need help finding them, this guide will show you all 19 Instrumental Triumph musical instrument locations. 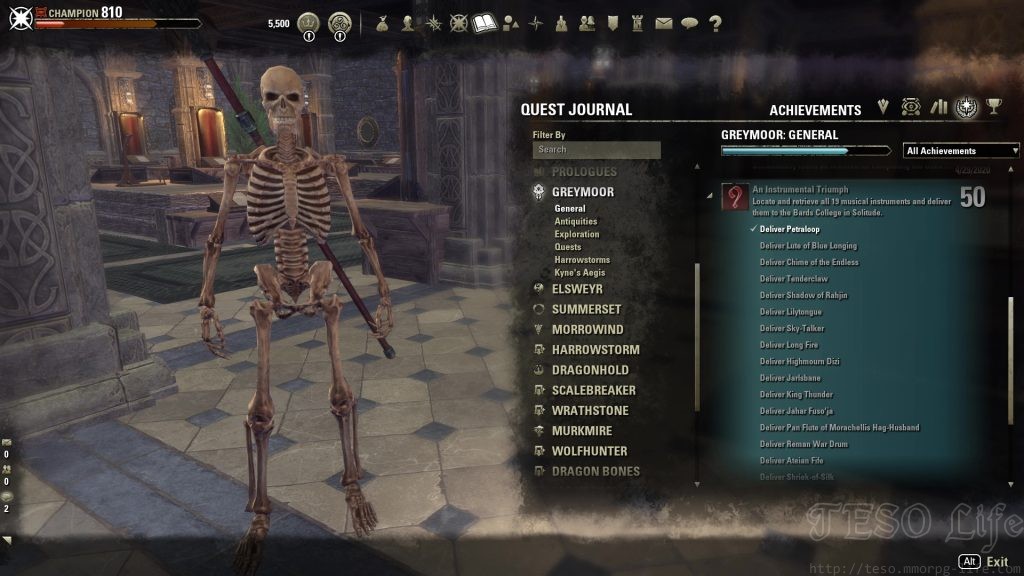 In order to start your pursuit, you’ll need to talk to Leiborn at the Bard’s College in Solitude. He’ll tell you about the missing instruments and point you towards the first one, Petraloop, which is being sold at an auction. He’ll give you a disguise that’ll allow you to enter, but you’ll find out the item has already been sold. The auctioneer won’t tell you who he sold it to, but he’ll thell you they were drunk. Look for the only patron that’s staggering, and talk to her. She’ll sell you the lute for 600-odd gold coins – talk to her servant outside and you’ll get the instrument.

Once you return to Leiborn with the lute, he’ll give you Nel’s Hidden Loves, a poem that contains hints that will help you find the remaining 18 instruments. The hints are quite cryptic, so if you don’t want to decipher them yourself, keep reading and we’ll show you all the exact locations.

The Lute of Blue Longing is hidden away in Nchuthnkarst, the public dungeon in Blackreach. It’s the area in the middle of the map, and the entrance is east of the Dusktown wayshrine. Once you’re in, hug the right wall untill you reach the door that leads into Nchuthnkarst Control Room. Cross the big hall and go through the other door, into Nchuthnkarst Complex. Turn right at the first intersections and follow the stairs down. Head to the tower visible in the distance. You’ll find the chest with the loot on a ledge by the eastern staircase.

Chime of The Endless location

You can find the Chime of the Endless in Blackreach, near Greymoor Keep. If you use the Hjalmaarch Great Lift, just head north and follow the bridge to the fortress. When you reach the gate jump down to the right and walk to the edge of the cliff overlooking the lava lake. Look to the right and you should see a ledge with glowing yellow flowers. Drop down there and you’ll find the instrument.

Tenderclaw can be found in Shadowgreen, a delve in the hills northwest of Solitude. Once inside, hug the right wall, through the first chamber and the tunnels beyond, until you reach a hanging bridge. Cross it, then turn right, towards the waterfall. Shimmy along the ledges and you’ll see a chest glownig on the other side of the river. Cross from the top of the waterfall, and you’ll find the instrument in the chest.

You’ll find the shadow of Rahjin in Dragonhome, a delve in the far west of the Western Skyrim map, northwest from the Mor Khazgur wayshrine. Once inside, keep to the left until you reach the main plateau. Go up the stairs to the north-facing altar above the river, and look for a chest next to the pillar on the left.

The Lillytongue harp is also hidden in a delve. The cave in question is called Chillwind Depths, and it can be found in the central part of Western Skyrim, south from the Dragon Bridge wayshrine. When you go in, keep to your left until you reach a low waterfall. There’s a hidden passage next to it, behind the spider webs. You’ll find the instrument in that passage.

The Sky-Talker can be obtained in the Labyrinthian public dungeon, in the southeastern corner of Western Skyrim, southeast of the Morthal wayshrine. Once you’re in, follow the central path to the barrow. You’ll find the instrument inside, next to the outer wall.

The Long Fire instrument is hidden outside, in the small outpost next to the Dragon Bridge. Teleport to the wayshrine, then turn towards the bridge. You’ll see a guard house next to it. If you go below the guard house, you’ll see the instrument propped up against the wall.

You’ll find the Highmourn Dizi in The Scraps, a delve in the Blackreach: Greymoor Caverns area. Starting from the Dwarven Run wayshrine head south and hug the right wall as it turns west. Once you’re inside, go to the chamber with the pond in the northeast, the purple one. You’ll find the instrument in the middle of a bunch of glowing mushrooms.

You can find Jarlsbane on the northern edge of the continent, near the Northern Watch Ritual Site – the big, red, glowing portal thing directly north from Solitude. Once you’re on the cliffs, drop down to the shore and look for a suspicious grotto. You’ll find the instrument on a dock inside, probably forgotten by a band of hasty smugglers.

King Thunder is a drum you can find in Mor Khazgur, in the west of the Western Skyrim map. There’s a wayshrine right next to the fortress – teleport there and head into the great hall. Turn into the right wing, and you’ll find the drum stashed away among some crates.

You can get Jahar Fuso’ja from Sword’s Point Watchtower, which is on the northern coast, northwest from the Kilkreath Temple wayshrine. Go into the tower and climb the stairs. You’ll find the instrument in a wooden crate next to the dresser.

You can get the Pan Flute from the Blackreach Caverns. Teleport to the Lightless Hollow wayshrine, in the eastern portion of the cave complex, then follow the path leading east, up the hill and through the ravine. You’ll reach a small stream at one point, and if you look to the left, you’ll see a chest glowing from an alcove. The instrument will be in it.

The Reman War Drum is hidden in a crate in the fungus-infested depths of Blackreach. You’ll find it atop a stone spire surrounded by giant mushrooms, east of the Greymoor Keep wayshrine, south of the fortress itself. You’ll have to perform some precise jumps in order to get there.

The Ateian Fife is in an abandoned mine shaft in the Blackreach: Greymoor Caverns map. Teleport to the Dusktown wayshrine, then head up the hill and into the cave. Climb the scaffolding until the first intersection, then head left along the wall. You’ll reach a dead end, but if you look to the right, you’ll spot a hole in the wall. Crawl through it to reach the instrument.

You can find the Shriek-of-Silk at Morthal, the town in the snowy eastern part of the map. Go into Jarl Reddharn’s Hall – the biggest building in town – then climb up the stairs, all the way to the top. You’ll find the instrument atop a wardrobe in the bedroom.

This one is really close to Solitude. It’s hidden in a shipwreck encased in ice, east of the city. Go into the icy wastes and look for a ship snapped in half. The instrument will be in a crate, up on the deck, in the stern. You’ll need to use the stairs inside the ship’s bowels to get there.

The Lodestone lyre can be found in the southwestern part of the Western Skyrim map, near the town of Karthwatch. If you follow the road from the Southern Watch wayshrine, you’ll find it in no time. There’s a windmill on a hill above the town. Head there and look for the instrument under an awning at the back of the mill.

The Dozzen Talharpa can be found in the southern part of the map, southwest from Morthal. Follow the river from the town, and when you’re past the island with the enemy camp, go to the eastern bank. You’ll discover a dwemer lift, and in the adjoining chamber a bench with a bunch of stuff, your instrument included.