The best Warden race for new characters in ESO Morrowind depends on the role you want your character to play. If you are an experienced player, who plays Elder Scrolls Online regularly, you probably already know the answer to this question. This guide is intentded to help new players who might not know about the best roles for certain races. 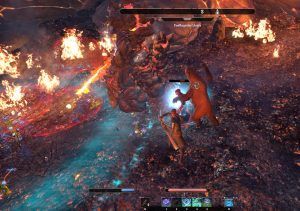 What is the best race for Warden?

The Warden is the first new class introduced in the Elder Scrolls Online. This class is perfect for all three type of play styles – damage dealers, tanks and healers. The list below will give you some hints for choosing, no matter which role you prefer. What makes Wardens so unique, beside being the first new class, is their ability to warp the majority of their abilities into ones tha use magicka or stamina, thus making the gameplay more versatile and fun.

Keep in mind that just like for any other class, there are three ability specs: Animal Companions, Green Balance and Winter’s Embrace. The first one serves as a ranged spell tree, the second is a healing one, and the third forcuses on melee damage plus survivability.

Animal Companions is your true ranged damage spec. The abilities here cause physical, magic or poison damage. They are all ranged spells, with major buffs that almost every Warden will have active in their bars – Falcon’s Swiftness and Betty Netch. The base Falcon’s Swiftness spell gives 30% increased movement speed and 20% increased stamina recovery, and it has a rather cool animation. The base Betty Netch spell restores magicka over time, increasing spell damage as well. This spec, in general, is the most interesting one considering you can use the ultimate to summon a bear to fight by your side. What makes it even more powerful (if that’s even possible) is the passive that increases your magicka and stamina recovery by 12% if an animal companion ability is slotted. The spec works for all races and it is considered the most versatile one.

Green Balance is what you’d call a healing spec. The range of healing spells goes from both small and large AOE heals, to single target ones and the heals-on-attack buff. With the passives, you heal more after you first heal, while also increasing the target’s maximum health and magicka recovery. If you like the sound of that, you should choose a race with increased healing or magicka/stamina race passives.

Winter’s Embrace is a tree filled with survivability spells and frost damage abilities. Just like the previous two, this one also has some interesting spell animations. The Frost Cloak that increases physical and spell resistances envelops you in a cold casing with a cool animation and sound. The damage-dealing spells like Impaling Shards can be even more powerful with the High Elf passive.