Summerset is the new area, an island in the southwest of Tamriel, added in the DLC of the same name. Like the others before it, it also has some treasure maps for you to discover. As usual, you’ll get a drawing of a scene where you’ll find the dig spot, and it’ll be up to you to actually pinpoint the location based on the scarce clues. If you get stuck, you should consult our Summerset treasure map locations guide, which will give you detailed explanations with a fair number of screenshots. 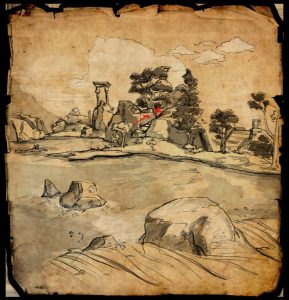 This dig spot is in the southeastern part of the island. Go to the Sil-Var-Woad Wayshrine, then head west. You’ll come upon a lake soon enough. On the northern shore of the lake, you’ll notice some ancient ruins. If you climb the hill there, you’ll see a colonnade at the top. There’s a tree nearby, and the treasure is hidden under it. The drawing is kinda tricky, since it shows the hill in question from the point of view of a waterfall in the middle of the lake. It’s hard to imagine anyone hanging out there casually and spotting a familiar scene. 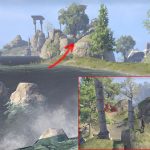 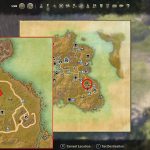 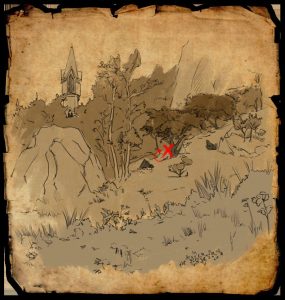 Once again, the drawing is a bit misleading. If you examine it, you’ll agree the main clue is the tower in the forest. Except that’s not really a forest. It’s a couple of trees outside the walls of a settlement. Not just any settlement, either – it’s the famed Illumination Academy. You’ll find it in the northwestern part of the map, by following the road south from the Crystal Tower Wayshrine. The dig spot is on the northeastern side of town, near the road leading to the eastern entrance. You’ll find it under one of the trees with the dark red leaves. 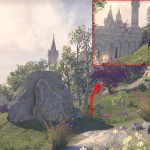 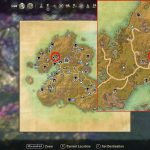 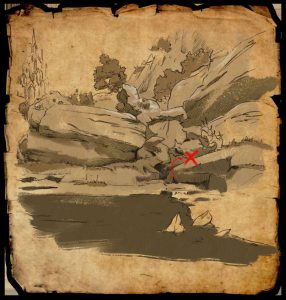 When you look at this drawing, you’ll see a body of water, some cliffs and a grand city in the distance. The body of water is actually the sea – this dig spot is on the western coast of Summerset. You’ll find it directly west of the city of Alinor, at Welenkin Cove. Follow the beach until you run into a rock formation resembling a boar. Stand to the south of it and turn inland, and you’ll see a bunch of reeds next to the cliff. This is where the treasure is. 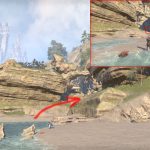 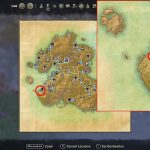 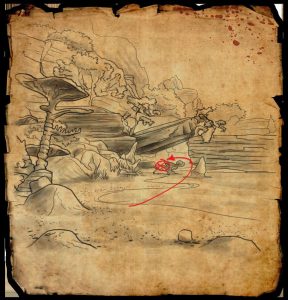 The drawing makes the scene look like something out of a fairytale – there’s a giant mushroom in the foreground, a quiet beach in a secluded bay and some interesting rock formations in the background. In order to get it, you’ll have to go to the far north of the island. The beach in question is on the northern shore, halfway between Veyond Wyte Wayshrine and King’s Haven Pass Wayshrine. If you follow the coast from the south, you’ll recognize the scene from the drawing without much difficulty. As you pass a waterfall, you might miss the mushroom, but you’ll definitely notice the rock formation. Go under it and look at the ground to the left to find your dig spot. 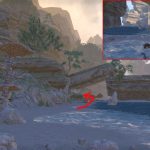 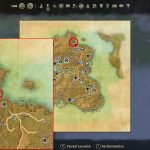 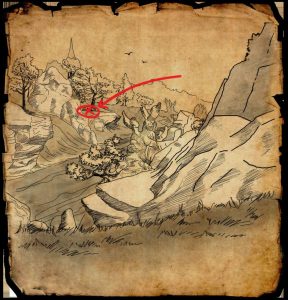 It’s all a bit muddled if you go by the drawing. The only defining features of the landscape are what looks like a river, and a gnarled tree or strange rock formation on the bank. The location is in the southeastern corner of Summerset, near the small island that’s divided from the rest of the landmass by a thin strip of ocean. It’s directly east from the Eastern Pass Wayshrine. The perspective of the drawing has you standing on the island, looking past the wierd tree/stone thing. The dig spot is under the tree pointed at on the scroll, which is standing on a ridge by the water. 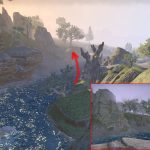 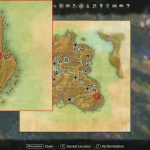 Summerset treasure map 3 – under the bridge 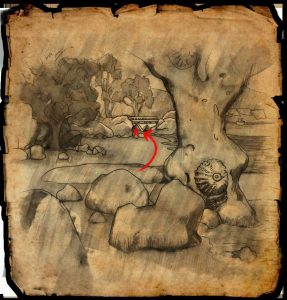 This is a tough one. There’s one of those weird rock formations native to Summerset blocking half the image. The only thing you can see in the background is a bridge of some kind, and the arrow pointing towards it. The location is in the big bay in the western part of the island. If you zoom in on the map, you’ll notice a river going into the bay at the northeastern corner, south from the Ebon Stadmont Wayshrine. This is where you should head – the bridge from the image is at the mouth of the river, and the dig spot is next to it. 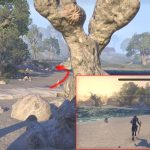 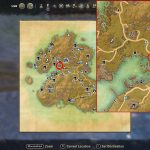 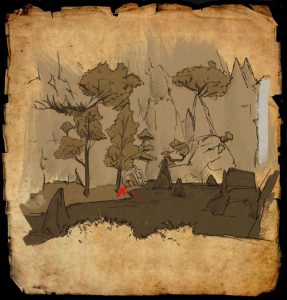 This is probably the most difficult treasure map in the expansion. It’s not because it’s particularly vague – there’s a waterfall and a giant nest you can use to orient yourself – but because there’s an error on the drawing. The X and arrow aren’t actually pointing to the dig spot. The location is in the southwestern part of the map, at the lake northeast of the city of Alinor, east of Cey-Tarn Keep. When you get there, you’ll find the waterfall in the south of the lake. You’ll quickly notice the tree with the large nest on it. However, the dig spot isn’t there. Instead, you should get closer to the waterfall, between the rocks, then look left. You’ll spot a small patch of land with two trees. The dig spot will be next to the one on the right. 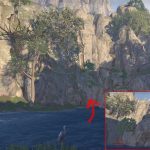 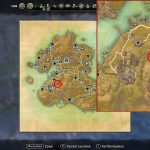 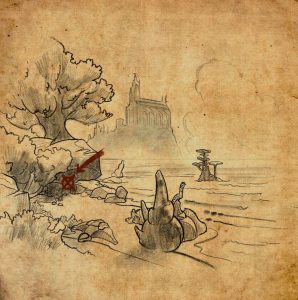 The drawing shows off a pretty unremarkable scene from a coast somewhere. However, you can see a pretty remarkable fortress in the distance, possibly on an island. That’s actually the College of Sapiarchs, which is on an island west of Lillandril. Travel to the city, which is in the northwestern part of Summerset, then head north. Pass the Queen’s Hatchery, then hug the coast and look for a giant tree on a rock by the ocean. When you find it, drop down to the beach and find the dig spot beneath. 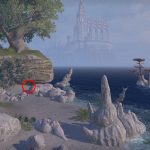 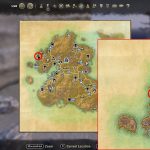 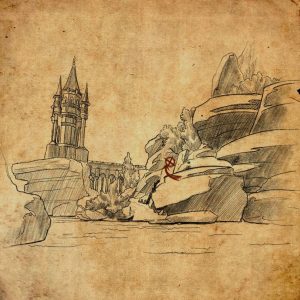 The last drawing shows an idyllic tower by the sea, and points towards a digspot somewhere on the cliffs. The tower in question is Dusk Keep, an edifice in the southeastern corner of Summerset. If you follow the path from the tower to the sea, you’ll see a small boat moored at the beach. Climb the cliffs above the boat and you’ll reach a cobblestone road leading to a set of stairs that connect it with the keep’s bridge. There’s a big stone at the final twist in the road, and the dig spot is behind that rock. 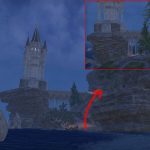 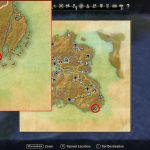